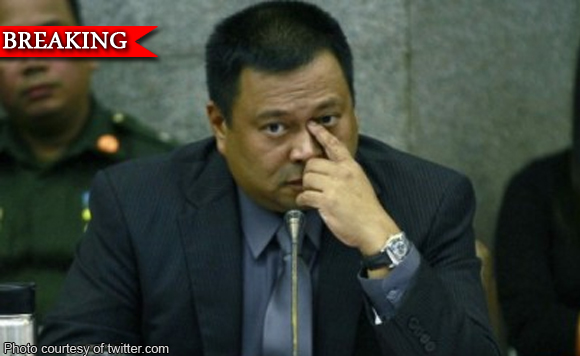 The Supreme Court (SC) has affirmed the 90-day preventive suspension order that the anti-graft court Sandiganbayan has issued against Senator Joseph Victor Estrada in connection with a graft case over the alleged anomalous purchase of high-powered firearms during his term as mayor of San Juan City.

In a resolution, the SC First Division dismissed “for lack of merit” the motion of Ejercito seeking to nullify the suspension order issued by the Sandiganbayan Fifth Division on August 22.

The SC said Ejercito failed to prove that Sandiganbayan magistrates committed grave abuse of discretion for ordering his suspension.

Instead, the SC concurred with the anti-graft court’s position that the suspension of public official charged with graft under a valid case information is mandatory.

“As correctly ruled by the Sandiganbayan, Section 13 of Republic Act 3019 prescribes the mandatory suspension of any incumbent public officer who has been charged of a valid information under the said law,” the SC resolution read.

“As such, no grave abuse of discretion could be attributed to the Sandiganbayan in suspending petitioners pendente lite (during litigation),” it added.

Estrada and his co-accused are facing a graft case before the Sandiganbayan Fifth Division in connection with the alleged anomalous purchase of P2.1-million worth of high-powered firearms in 2008.

Based on the information of the case, Estrada allowed the purchase using the city government’s calamity funds although San Juan was not under state of calamity at that time. The procurement was also allegedly done in haste without competitive bidding.

Estrada had earlier filed a demurrer to evidence seeking the dismissal of the case halfway through the trial, on the ground of the supposed weak evidence presented by the prosecution.

Senate President Aquilino “Koko” Pimentel III had earlier said that the Senate would have to wait first for the ruling of the Sandiganbayan on Ejercito’s demurrer before acting on the suspension order.