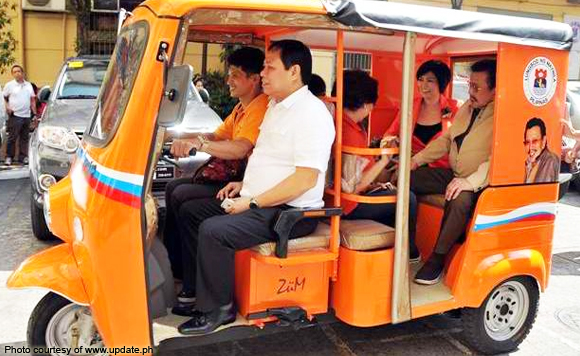 The city government of Manila led by Mayor Joseph “Erap” Estrada will be fielding electric tricycles (E-trike) in Binondo and Malate next month as part of the gradual introduction of the environment-friendly, battery-operated tricycles in Manila’s streets.

Estrada said they have chosen Malate and Binondo Chinatown as the pilot areas of the E-trike program because these are the centers of commerce and tourism of the capital city.

“Aside from helping our tricycle drivers improve their livelihood, we deemed it best to introduce E-trikes in Malate and Binondo to further boost tourism and businesses there,” the Manila mayor said.

Together with Ermita, Malate is one of Manila’s tourist belts and is home to big businesses and resort hotels that have been attracting millions of tourists.

Binondo, on the other hand, is the city’s Chinatown and where most of historical and cultural sites and properties of Manila are located.

Estrada stressed that no tricycle or “kuliglig” (motorized pedicabs) drivers in Manila will be displaced as they are the beneficiaries of the E-trike program, which will have a soft launching on October 15.

“No, we won’t be taking their source of income. In fact, we will be giving them a better alternative – these battery-run tricycles, which is cheaper and easier to maintain, and of course, their earnings will definitely increase,” Estrada pointed out.

An initial batch of 50 drivers from the local tricycle operators and drivers associations (TODAs) in Malate and Binondo have been selected to become the first recipients of the E-trikes, according to Dennis Alcoreza, chief of the Manila Traffic and Parking Bureau (MTPB).

The driver-beneficiaries will only pay P150 to 200 a day for four years to own the battery-powered tricycles, he added.

“They won’t even spend a single centavo in charging the batteries of the E-trikes. We at the city government will provide them with free charging stations, in partnership with Meralco,” Alcoreza said.