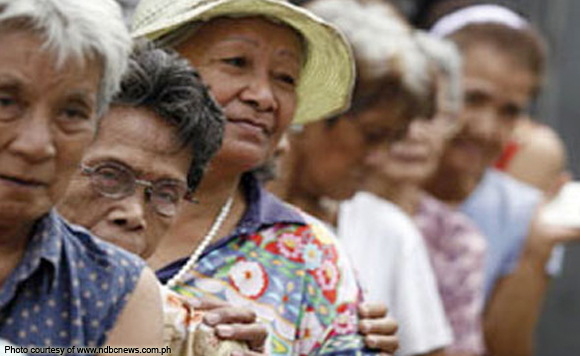 0 499
Share
Want more POLITIKO News? Get the latest newsfeed here. We publish dozens and dozens of politics-only news stories every hour. Click here to get to know more about your politiko - from trivial to crucial. it's our commitment to tell their stories. We follow your favorite POLITIKO like they are rockstars. If you are the politiko, always remember, your side is always our story. Read more. Find out more. Get the latest news here before it spreads on social media. Follow and bookmark this link. https://goo.gl/SvY8Kr

From P8.7 billion this year, the government budget for senior citizens will shoot up to P18 billion in 2017, increasing the number of beneficiaries from 1.382 million to 2.995 million, Senate Minority Leader Ralph Recto said.

This means that the government’s pension for indigent senior citizens will more than double next year to P18 billion, which would allow the enrolment of an additional 1.613 million 60-year-olds and above to a program that grants each a cash aid of P6,000 a year.

Recto welcomed the budget hike but called for the reduction of the 7 percent administrative cost ceiling so that more seniors can be included.

The budget is embedded in the budget of the Department of Social Welfare and Development (DSWD), which runs the program.

If ever the Congress will approve the budget hike, 2017 will be the third straight year that the budget for the senior pension will be increased.

“It will have the highest and the fastest increase among government social programs, a six-fold increase from P3.1 billion in 2014,” Recto said.

The distribution of a P500 monthly pension—or P6,000 yearly—to indigent seniors is made pursuant to Republic Act No. 9994 or the Expanded Senior Citizens Act of 2010.

Recto said that those qualified to receive the stipend are senior citizens who are frail, sickly, or have disabilities; are not receiving pension from the Social Security System (SSS), Government Service Insurance System (GSIS), or veteran’s pension; and do not have a permanent source of income or regular support from relatives.

The pension is said to be distributed every quarter through cash payment by DSWD Field Offices or city or municipal social welfare and development offices. (Dindo Matining)