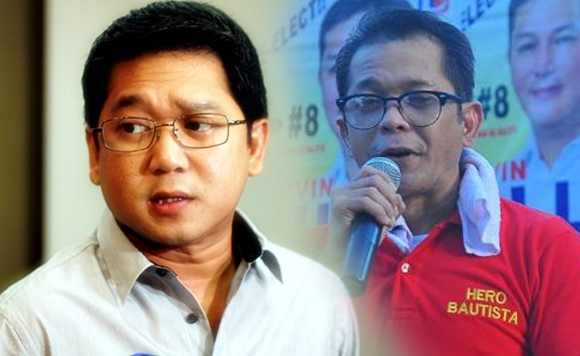 0 705
Share
Want more POLITIKO News? Get the latest newsfeed here. We publish dozens and dozens of politics-only news stories every hour. Click here to get to know more about your politiko - from trivial to crucial. it's our commitment to tell their stories. We follow your favorite POLITIKO like they are rockstars. If you are the politiko, always remember, your side is always our story. Read more. Find out more. Get the latest news here before it spreads on social media. Follow and bookmark this link. https://goo.gl/SvY8Kr

The Volunteers Against Crime and Corruption (VACC) on Friday filed a criminal and administrative case before the Office of the Ombudsman against Quezon City mayor Herbert Bautista and his brother councilor, Hero, who admitted drug abuse.

VACC chairman Dante Jimenez said they filed a complaint against Bautista brothers for violations of Executive Order 292 or the Administrative Code for dishonesty, neglect of duty, misconduct, and conduct prejudicial to the best interest of service as a public official.

The group also accused the two of violating pertinent laws, such as the Republic Act 9165 or the Comprehensive Dangerous Drugs Act, and the Revised Penal Code under dereliction of duty.

Jimenez added that the Bautista brothers violated “Ordinance Adopting the Anti-Drug Abuse and Rehabilitation Program” and the “Ordinance Implementing The Drug-Free Workplace,” as well as the “Revised Rules on Administrative Cases in the Civil Service.”

He also said that Mayor Bautista should also be held liable for the proliferation of illegal drugs in the city and the spate of summary killings of suspected drug pushers.

On August 16, Hero admitted that he was the elected official who tested positive for shabu and marijuana.

He went on indefinite leave for drug rehabilitation. He also denied that he was protected by his brother.