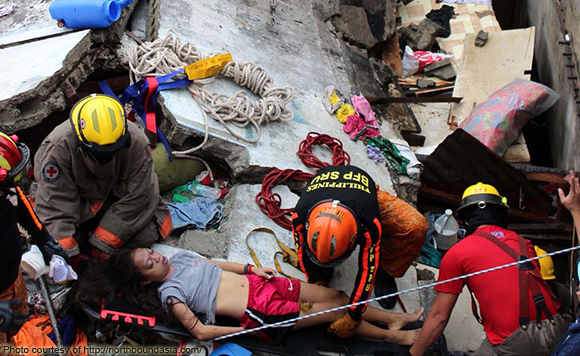 Several people were feared injured when a concrete wall collapsed this morning in Sta. Cruz, Manila even as Mayor Joseph “Erap” Estrada immediately dispatched more than 50 rescuers and other emergency units to assist the affected families.

As of 10 am, two people have been pulled out alive from the rubble where about four shanties were pinned down by concrete debris, according to Johnny Yu, head of the Manila Disaster Risk Reduction and Management Office (MDRRMO).

Immediately after hearing about the incident, Estrada dispatched the MDRRMO’s rescue units at the site – Doroteo Jose corner Oroquieta Street, just outside the Manila City Jail.

“All available rescue and emergency units are now on the scene as we speak. We are exerting all effort to assist them,” Estrada assured, adding that city government will take care of the medical needs of the wounded if there are any.

“I have directed Mr. Yu and all concerned city hall departments to provide all the needs of the affected families,” he said.

Yu said a portion of the seven-foot boundary wall outside MCJ compound gave in at around 9 am, apparently because of heavy rains, and pinned down about four to five shanties occupied by about 20 people.