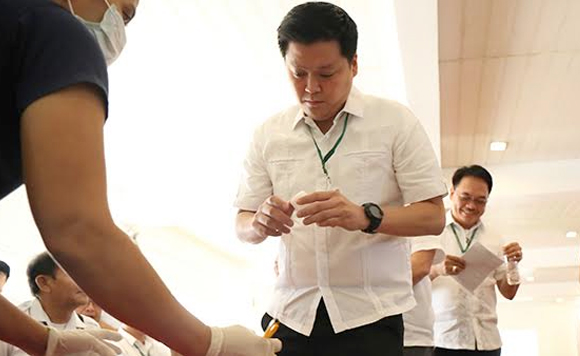 Valenzuela City Mayor Rex Gatchalian has voluntarily submitted himself for drug test and required all city hall employees to do the same.

Gatchalian then ordered the City Health Office (CHO) and the Human Resource and Management Office (HRMO) to conduct a five-day mandatory drug test for all the 5,000 city hall employees, from July 25 to July 29.

This will be held at the temporary testing center set up at the Social Hall Building, Valenzuela City Government Complex.

City-elected officials and all department heads of the city government are also enjoined to partake in this important measure, to show full support to Pres. Rodrigo Duterte’s serious battle against illegal drugs.

Priority units to be tested are those that belong in the rescue and peace and order sections, such as the Bureau of Fire Protection (BFP), Bureau of Jail Management and Penology (BJMP), and the Philippine National Police (PNP).

Employees who shall be found positive of illegal substance intake, such as methamphetamine and cannabis (marijuana), shall be terminated.

Complimentary to this initiative, the officials of the barangay government are also encouraged to support the national crusade against illegal drugs through the Valenzuela City Police Station’s Anti-Illegal Drugs Campaign Plan dubbed as “Project Double Barrel”.

The said project is a combination of the “Project Tokhang” (the lower barrel) and “Project HVT/High Valued Target” (the upper barrel).