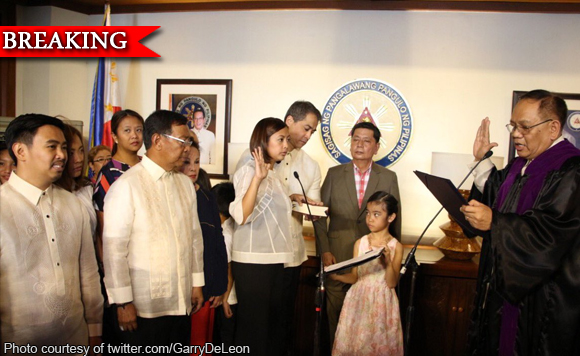 A Binay is officially back at the helm in Makati City, the Philippines’ central business district.

This, after Abigail Binay took her oath as Makati mayor Monday, June 27 at the Coconut Palace.

Abigail, a former Makati congresswoman, beat the Liberal Party’s (LP) Kid Peña in the May 9 elections.

It can be recalled that Peña took over as mayor in July 2015 following the suspension of Rep. Binay’s brother, former mayor Junjun Binay. Peña’s stint broke 27 straight years of Binay rule in the city.

Junjun was also present at the oath taking, along with his sister Senator Nancy Binay and family matriarch Elenita Binay.