AlDub vs. JaDine in MMFF: Congress to look into ticket switching 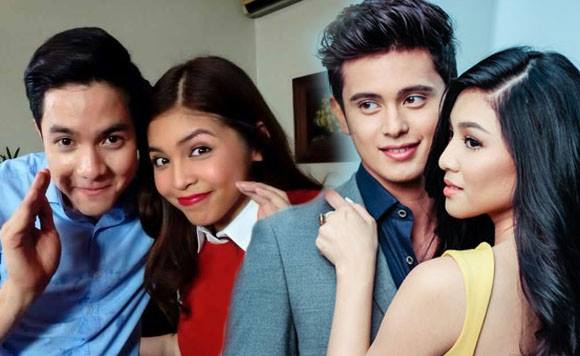 0 677
Share
Want more POLITIKO News? Get the latest newsfeed here. We publish dozens and dozens of politics-only news stories every hour. Click here to get to know more about your politiko - from trivial to crucial. it's our commitment to tell their stories. We follow your favorite POLITIKO like they are rockstars. If you are the politiko, always remember, your side is always our story. Read more. Find out more. Get the latest news here before it spreads on social media. Follow and bookmark this link. https://goo.gl/SvY8Kr

To clear up the confusion of fans of the 2015 Metro Manila Film Festival (MMFF) entry “My Bebe Love,” which features the love team of Alden Richards and Maine “Yaya Dub” Mendoza, the House of Representatives will investigate the reported switching of movie tickets.

House Committee on Metro Manila Development Chairman Winston Castelo said that the reported switching of movie tickets, where moviegoers who went to see the “My Bebe Love” were given tickets for another film, “Beauty and the Bestie” purportedly to reflect higher gross earnings for the latter film will be included to lower chamber’s probe on the alleged irregularities that occurred in the 2015 MMFF.

The two films, produced by the two largest television networks in the country–ABS-CBN and GMA-7–are reportedly the top grossers in the MMFF.

“My Bebe Love,” features Vic Sotto, Ai-ai delas Alas and the AlDub while “Beauty and the Bestie” stars Vice Ganda, Coco Martin and ABS-CBN’s one of the hottest love teams James Reid and Nadine Lustre a.k.a JaDine.

Castelo said the congressional inquiry on MMFF alleged irregularities has to be expanded to include the alleged ticket swapping as traditional media outfits and social media have reported the same issue with intensity.

The House Committee on Metro Manila Development has already said that it would conduct public hearings after the New Year celebrations on the irregularities that occurred in the 2015 MMFF, particularly the disqualification of the film “Honor Thy Father” from the selection of the Best Picture category of the MMFF.

“This is a lingering issue that has not been appropriately addressed and clarified,” Castelo said.

The lawmaker said that his committee is eyeing to invite Angel P. Tuviera Entertainment and GMA Films for “My Bebe Love” and ABS-CBN’s Star Cinema for “Beauty and Bestie.”

“The intention is to strengthen the industry, make it more viable, and evolve it to become responsive for education and entertainment,” Castelo said.

In a Philippine Daily Inquirer report, “My Bebe Love’s” Director Jose Javier Reyes admitted that movie ticket swapping has occurred in some cinemas.

“Got word from producer: it is true. Make sure that the title of the movie on your ticket is what you want to watch. Beware of ticket swapping,” Reyes said.