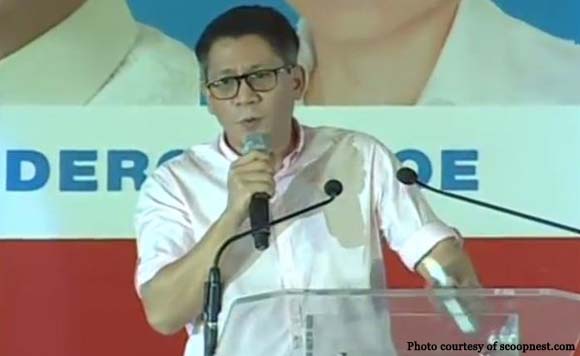 0 743
Share
Want more POLITIKO News? Get the latest newsfeed here. We publish dozens and dozens of politics-only news stories every hour. Click here to get to know more about your politiko - from trivial to crucial. it's our commitment to tell their stories. We follow your favorite POLITIKO like they are rockstars. If you are the politiko, always remember, your side is always our story. Read more. Find out more. Get the latest news here before it spreads on social media. Follow and bookmark this link. https://goo.gl/SvY8Kr

A member of the Liberal Party (LP) scored the Palace for pressuring Congress to drop the proposed cut in income taxes.

“It simply is wrong for the executive branch to pre-empt, and worse, co-opt the exclusive law-making role of Congress,” said Pasig Rep. Roman Romulo, one of the authors of the tax-reform bill.

Earlier, Speaker Feliciano Belmonte Jr. admitted that the measure lowering individual tax rate can no longer be passed by the House of Representatives this Congress due to President Aquino’s opposition.

“The bosses have made their will very clear in every survey, media scanning and congressional hearing. They want tax reduction, period,” said Romulo said, who is running for senator in Poe’s ticket.

“It is a no brainer to see the flaws in this argument. One, taxes are not the money of government but the hard-earned money of the people — the bosses. And two, much of the taxes collected are not being spent at all, but languish in banks which are the ones who use them, and not for the sake of the public,” he said.

He also asked the House leadership to pass the bill and let the President decide whether or not to veto the proposed measure.

“To simply wave away the prople’s clamor for tax reduction as the cries of politicians wishing to earn cubby points from the public is simply being cavalier and missing the point entirely. The point is the people want relief from inequitable taxation and greater purchasing power,” Romulo added.