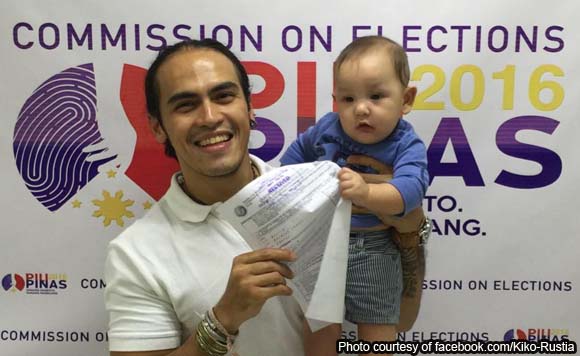 0 1,148
Share
Want more POLITIKO News? Get the latest newsfeed here. We publish dozens and dozens of politics-only news stories every hour. Click here to get to know more about your politiko - from trivial to crucial. it's our commitment to tell their stories. We follow your favorite POLITIKO like they are rockstars. If you are the politiko, always remember, your side is always our story. Read more. Find out more. Get the latest news here before it spreads on social media. Follow and bookmark this link. https://goo.gl/SvY8Kr

Former “Born to be Wild” host and “Survivor Philippines” contestant Kiko Rustia has thrown his hat into the political race in Pasig City by running for councilor of District 1 in the 2016 elections.

In a Facebook post, Rustia said he believes his work as an environmental journalist will be an asset should he be elected as councilor.

“Being an environmental TV journalist not only allowed me to pursue my passion for environmental education and protection, it gave me the opportunity to step back and see the bigger picture. It brought me to areas of both beauty and conflict. I’ve been to places of both progress and disaster. And I’ve seen the achievements and shortcomings of local governments in all levels,” he said.

Since he’s seen how much of the country’s potential has been lost due to “ignorance, indifference, and poor governance,” Rustia said he wants to make a difference by running for public office and serving the people.

While acknowledging he’s not a politiko, the TV host said he’s willing to learn the ropes of politics and even use his penchant for being outdoors to offer “out of the box” solutions to Pasig City’s problems.

“I am here to offer Pasig and the people new and fresher perspective- from the guy who has lived ‘outside the box’. I am here to support the city’s current projects and to contribute more to the city’s continuing development. I would like to take all the experiences and knowledge I gathered from my travels and interactions and share it with the city’s council and the Pasig LGU,” he said.