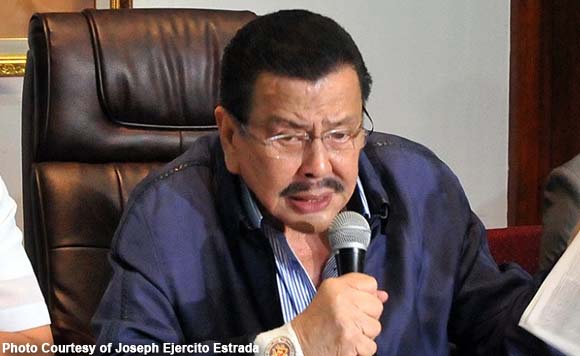 0 663
Share
Want more POLITIKO News? Get the latest newsfeed here. We publish dozens and dozens of politics-only news stories every hour. Click here to get to know more about your politiko - from trivial to crucial. it's our commitment to tell their stories. We follow your favorite POLITIKO like they are rockstars. If you are the politiko, always remember, your side is always our story. Read more. Find out more. Get the latest news here before it spreads on social media. Follow and bookmark this link. https://goo.gl/SvY8Kr

A former actor-turned-vice mayor, a disgraced police official, an ex-traffic chief, and a member of Romualdez clan are among the senatorial “wannabees” former president and re-electionist Manila mayor Joseph Estrada will support in the 2016 elections.

Estrada himself bared his list of senatorial lineup even as he has yet to announce who between his godchild, Sen. Grace Poe, and his “kumpadre”, Vice President Jejomar Binay, will he vote for in the presidential race.

Of course, topping his list is his ally, outgoing Manila mayor Isko Moreno.

Estrada, in a Manila Bulletin article, said in jest that he did not include Sen. Tito Sotto in his list because the popularity of the “Aldub” kalyeserye in Eat Bulaga would surely boost his candidacy. Sotto is with the slate of the United Nationalist Alliance (UNA).

He raised an eyebrow and shook his head when former Justice Secretary Leila De Lima’s name was mentioned.

As for Tolentino, Estrada reiterated his support to Tolentino, who left the Liberal Party (LP) ticket after his involvement in the “Playgirls” scandal.