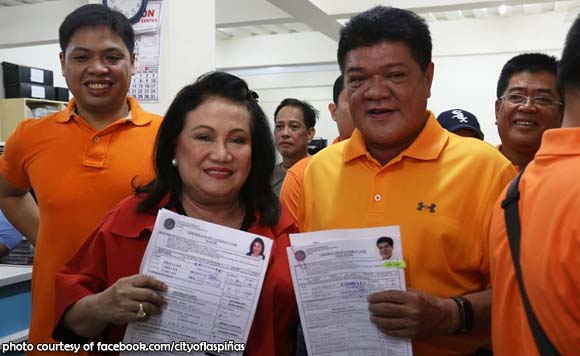 Another wife will run in the 2016 elections in a quest to take over her politician-husband’s seat.

A member of the Nacionalista Party, Mrs. Aguilar will have incumbent Vice Mayor Luis Bustamante as her running mate.

She vowed to continue the programs implemented by her husband such as free education, social services and environment protection.

Politicians fielding their wives is not unusual in local politics, especially in Metro Manila.

They often act as “proxies” while their husbands wait for another three years to be qualified to run again for their old positions.

And so Abalos’ ally, former mayor and outgoing Mandaluyong representative and House majority floor leader Neptali Gonzales, whose wife Quennie will run for his post.

Even Vice President Jejomar Binay, during his last term as mayor of Makati, had his wife Elenita run for mayor. She also served for just one term.

Other mayor’s wife was not equally lucky.

Loretta Fresnedi failed in her bid to replace her husband, Muntinlupa mayor Jaime Fresnedi, in the 2007 elections.

Find out what QC stakeholders want in local investment…